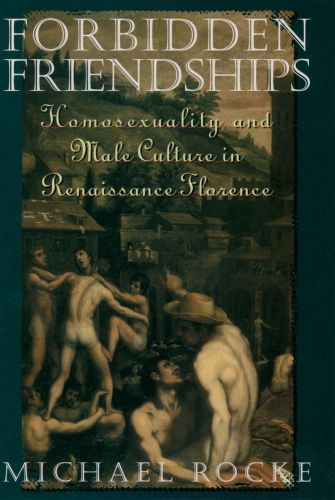 "This is a superb work of scholarship, impossible to overpraise.... It marks a milestone in the 20-year rise of gay and lesbian studies."--Martin Duberman, The Advocate The men of Renaissance Florence were so renowned for sodomy that "Florenzer" in German meant "sodomite." In the late fifteenth century, as many as one in two Florentine men had come to the attention of the authorities for sodomy by the time they were thirty. In 1432 The Office of the Night was created specifically to police sodomy in Florence. Indeed, nearly all Florentine males probably had some kind of same-sex experience as a part of their "normal" sexual life.
Seventy years of denunciations, interrogations, and sentencings left an extraordinarily detailed record, which author Michael Rocke has used in his vivid depiction of this vibrant sexual culture in a world where these same-sex acts were not the deviant transgressions of a small minority, but an integral part of a normal masculine identity. Rocke roots this sexual activity in the broader context of Renaissance Florence, with its social networks of families, juvenile gangs, neighbors, patronage, workshops, and confraternities, and its busy political life from the early years of the Republic through the period of Lorenzo de' Medici, Savonarola, and the beginning of Medici princely rule. His richly detailed book paints a fascinating picture of Renaissance Florence and calls into question our modern conceptions of gender and sexual identity.