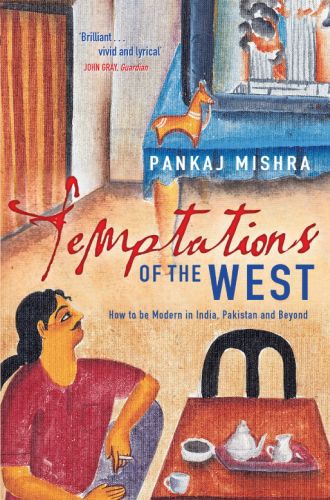 Temptations of the West

From Bollywood stars in Bombay worrying whether they are sexy enough to a heroin addict in Pakistan mocking jihad; from Indian mafia dons with political ambitions to Afghans waiting for American benevolence; from Kashmiri Muslims longing for democracy to Tibetan Buddhists fighting to preserve religion in politics – Temptations of the West is a travel book unlike any other. In a narrative as revealing as it is profound, Pankaj Mishra’s new book dissolves the old boundaries between East and West, challenging every romantic cliché about the conflicts and dilemmas at the heart of the modern world. ‘Mishra offers a compelling blend of memoir, narrative history, politics, religion and philosophy. Thoughtful, intelligent and rigorous, this is a deep, insightful study of the very notion of modernity’ Observer ‘Mishra is a precise observer and a subtle analyst, keener to understand than to blame . . . In a thousand details – such as the grimace he catches on the face of a sycophantic businessman as a politician’s bodyguard rinses curry-stained hands in his swimming pool – he salutes humanity’s paradoxes and wit’ The Economist ‘Wonderful. The narrative is nterspersed with sophisticated cultural commentary . . . and, if anything, the point of this important book is to collapse fallacious distinctions between East and West’ Condé Nast Traveller