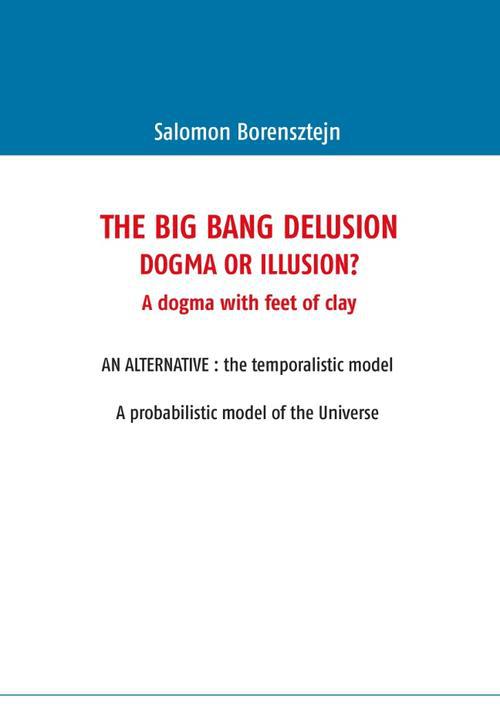 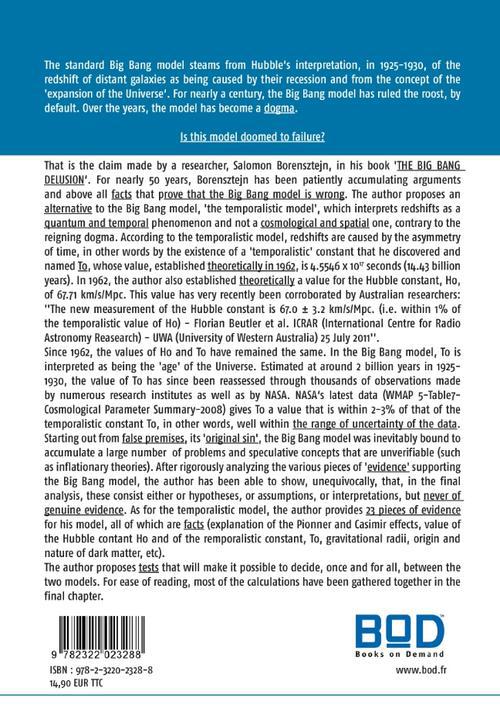 The standard Big Bang model steams from Hubble's interpretation, in 1925-1930, of the redshift of distant galaxies as being caused by their recession and from the concept of the 'expansion of the Universe'. For nearly a century, the Big Bang model has ruled the roost, by default. Over the years, the model has become a dogma.

Is this model doomed to failure?

That is the claim made by a researcher, Salomon Borensztejn, in his book 'THE BIG BANG DELUSION'.
For nearly 50 years, Borensztejn has been patiently accumulating arguments and above all facts that prove that the Big Bang model is wrong. The author proposes an alternative to the Big Bang model, 'the temporalistic model', which interprets redshifts as a quantum and temporal phenomenon and not a cosmological and spatial one, contrary to the reigning dogma. According to the temporalistic model, redshifts are caused by the asymmetry of time, in other words by the existence of a 'temporalistic' constant that he discovered and named To, whose value, established theoretically in 1962, is 4.5546 x 1017 seconds (14.43 billion years). In 1962, the author also established theoretically a value for the Hubble constant, Ho, of 67.71 km/s/Mpc. This value has very recently been corroborated by Australian researchers: ''The new measurement of the Hubble constant is 67.0 ± 3.2 km/s/Mpc. (i.e. within 1% of the temporalistic value of Ho) - Florian Beutler et al. ICRAR (International Centre for Radio Astronomy Reasearch) - UWA (University of Western Australia) 25 July 2011''.
Since 1962, the values of Ho and To have remained the same. In the Big Bang model, To is interpreted as being the 'age' of the Universe. Estimated at around 2 billion years in 1925-1930, the value of To has since been reassessed through thousands of observations made by numerous research institutes as well as by NASA. NASA's latest data (WMAP 5-Table7-Cosmological Parameter Summary-2008) gives To a value that is within 2-3% of that of the temporalistic constant To, in other words, well within the range of uncertainty of the data. Starting out from false premises, its 'original sin', the Big Bang model was inevitably bound to accumulate a large number of problems and speculative concepts that are unverifiable (such as inflationary theories). After rigorously analyzing the various pieces of 'evidence' supporting the Big Bang model, the author has been able to show, unequivocally, that, in the final analysis, these consist either or hypotheses, or assumptions, or interpretations, but never of genuine evidence. As for the temporalistic model, the author provides 23 pieces of evidence for his model, all of which are facts (explanation of the Pionner and Casimir effects, value of the Hubble contant Ho and of the remporalistic constant, To, gravitational radii, origin and nature of dark matter, etc).
The author proposes tests that will make it possible to decide, once and for all, between the two models. For ease of reading, most of the calculations have been gathered together in the final chapter.